Home Poker News How popular is poker in 2020 compared to the poker boom era?

How popular is poker in 2020 compared to the poker boom era?

Poker is still popular — we know that. Even during the global health pandemic, many card rooms around the world remain packed, and multiple online poker sites recently hosted major events that lured in thousands of players. But just how popular is the game today compared to the poker boom era, which is widely considered to be 2004 until Black Friday (April 2011)?

There are a couple of ways of getting the answer to this interesting question. The first method is to check and see what’s on mainstream television. Up through Black Friday, poker shows were regularly on the major networks especially in the U.S. — Poker After Dark (NBC), High Stakes Poker (Game Show Network), WSOP (ESPN), World Poker Tour (Fox Sports/Travel Channel), NBC National Heads-Up Championship (NBC), and Poker Superstars (Fox Sports).

After Black Friday, the networks lost their major sponsors — the poker sites. As such, poker on television is now limited to the WSOP Main Event in the summer, still on ESPN, and Fox Sports covering the WPT monthly. Poker fans now watch the game in other ways, such as the PokerGO streaming app or on Twitch, but the casual television audience is mostly gone.

The second method of analyzing poker’s popularity is to dig into the data. One way to do that is to use the Google Trends tool, which we recently did to evaluate online poker’s rebirth. Another method is to compare Nevada gaming results over the years, as the Silver State is home to Las Vegas, the poker capital of the world.

Google Trends provides some insightful data on the game of poker. The graph reveals how popular the search term “poker” on Google compares on a monthly basis from 2004 until present. As you’ll notice from the following graph, the slope takes a steep decline after hitting its peak popularity in July 2005, and then again following Black Friday. 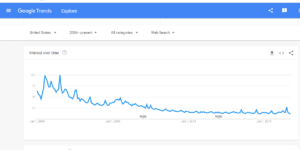 Chris Moneymaker’s historic 2003 WSOP Main Event win sparked the most massive poker boom ever. People all around the world became fascinated with the game after watching an amateur like Moneymaker win poker’s most prestigious tournament on ESPN.

So by 2004 the game was growing at unthinkable heights and would continue to do so for the following few years. The above Google Trends graph compares the popularity of the “poker” search term to its peak month (July 2005). A score of 100 is the peak month, and a score of 50, for example, means total searches that month were 50% as frequent as the peak month.

July 2004 was the second most popular month for poker searches on Google, receiving a score of 99. During non-WSOP months every year, you’ll notice the popularity drops off compared to summer months. That is because poker is always at its most popular stages during the WSOP days.

After July 2007, the month Jerry Yang won the Main Event, the graph indicates a slow decline in popularity over the next four years. And then Black Friday struck in April 2011, and the drop became even more drastic. For the following nine years, the “poker” search term didn’t receive a score above 19 except in a few months that hit the low-20s.

But the game is now seeing a bit of a rebirth, per Google Trends. Searches were up over the summer, perhaps due to the WSOP Online Bracelet Series on WSOP.com and GGPoker. In July, interest in poker was as high as it has been since July 2011.

If you ever wondered how popular poker is at any given time, check the UNLV Center for Gaming Research. Nevada, home to the University of Nevada-Las Vegas (UNLV), sets the tone for poker around the world. When poker revenue is up in Las Vegas, it’s typically up most places around the world.

So, how does current Nevada poker revenue compare to the poker boom era? Quite favorably compared to the early stages of the poker boom (2004), and not all that far off the height of the boom. In fact, July 2019 was Nevada’s most profitable month for poker, with the card rooms collecting $22,227,000 in rake.

Since the poker rooms reopened in June, revenue has been higher than most expected. June ($8,711,000), July ($8,838,000), and August ($7,169,000) were all successful months given the table limit restrictions and the world facing a global health pandemic. So, it’s a bit unfair to compare the pandemic era months to non-pandemic months. But we can still see that live poker remains relatively popular even during a public health crisis.

Additionally, as some poker rooms in Las Vegas and Reno have closed in recent years, total number of card tables in Nevada are down. There were 1,002 poker tables around the state in July 2010 — the most ever. Pre-coronavirus, that number was down to 538 in March 2020. At present, with only 18 of the 31 poker rooms having reopened since COVID-19, that number is nearly cut in half, although it won’t remain that way permanently.

So, poker is still a very popular game and the future for poker remains bright. But the game was clearly more of a head-turner during the poker boom era.