Robbie Strazynski takes on poker’s pressing issues in “The Orbit”

Robbie Strazynski’s well-earned reputation as one of poker’s most prolific content producers doesn’t come lightly. As the founder of Cardplayer Lifestyle, Strazynski travels around the globe in his poker blogging exploits.

Strazynski’s work has produced interviews, feature articles, and video content involving some of the biggest events and names in the world of poker. His new show, The Orbit, invites four guests to a roundtable discussion with Strazynski, tackling some of poker’s biggest topics.

Poker.org enjoyed the opportunity to ask Strazynski a few questions in an email exchange about The Orbit, which premiered July 30 on the Twitch Poker channel. Show replays can be found at the Cardplayer Lifestyle YouTube channel.

Poker.org: First of all, what an epic intro!  Who came up with that?

Robbie Strazynski: Thanks! So The Orbit is actually a joint venture among myself and a couple of poker industry veterans, Leigh Wiltshire and Des Duffy. Leigh has taken the lead on the production side and I’m a big fan of his excellent video editing skills. He also came up with the show’s name, which just makes sense on so many levels.

Very cool format, The Orbit is very literally a roundtable discussion. How did you come up with the idea, and how long has this been in the works?

I first had the idea for this type of show about five years ago. It was inspired by the (then-) American Poker Awards which used to have a conference component with numerous panel discussions when they first debuted.

While I know how to moderate a discussion and am grateful to have a sizable network of poker players, poker media members, and industry stalwarts to draw from for panelists, what I didn’t have was the video production know-how. I’ve known Des and Leigh for a few years, but it was only earlier this year where we got to talking and it suddenly dawned on us that we could collaborate to make this show happen.

First topic on Ep. 1 discussed the state of live poker. What are your thoughts on the different responses you got from the panel in that discussion?

To me, the responses immediately validated the entire concept behind the show, namely that of getting insight and opinions from a variety of different people who’ve got different perspectives. As much as poker is a global game, rules, regulations, culture, and perspectives can be vastly different from place to place. Getting to hear the views from live players, online players, live reporters, and industry operators based in different parts of the world was eye opening and helped to broaden my own horizons on the matter.

What are some of the challenges related to making worthwhile poker media content during the COVID-19 pandemic?

Naturally, the fact that live poker had been on hiatus for a while and is only slowly reemerging has had an effect on the amount of news being generated in the poker world. Attention has been focused almost exclusively online, which makes sense. As such, the hot topics of conversation within the community have naturally been more centered in the online poker realm.

As relates to The Orbit, if anything the pandemic/lockdown has actually assisted us somewhat in that it makes it a bit easier to get panelists to commit to a recording time since they’re not currently traveling the circuit. Plus, as opposed to just a few months ago, now the idea of jumping on a group Zoom call for an hour is pretty standard. Quite frankly, launching a show like The Orbit couldn’t have happened at a better time, and we hope to keep that momentum going.

You’ve had some of poker’s most important figures on the first two episodes, from all sides of the poker industry. Can you give us an idea of who will be appearing on some of the upcoming episodes of The Orbit?

Selecting panelists is one of the most important aspects of the show. We try to gather together a solid mix of people who are representative of the broadest possible cross-section of the poker community: men, women, players, media, industry personnel, North Americans, Europeans, etc.

We believe that doing this allows for thoughtful discussion and the presentation of a variety of different perspectives to each of the questions posed.

Viewers can expect more of the same in future shows, and we’re hopeful that after seeing how well things went on the first couple episodes, we’ll keep getting positive responses from the people we approach to be panelists.

How often can we expect new episodes?

For the time being, we see The Orbit as something of a “special attraction” and are aiming to produce a new episode every three weeks or so.

While there’s obvious value in the conventional weekly (or even more frequent) approach, we want to ensure the highest quality production, panels, and topics of discussion, the logistics of which take time to execute on. 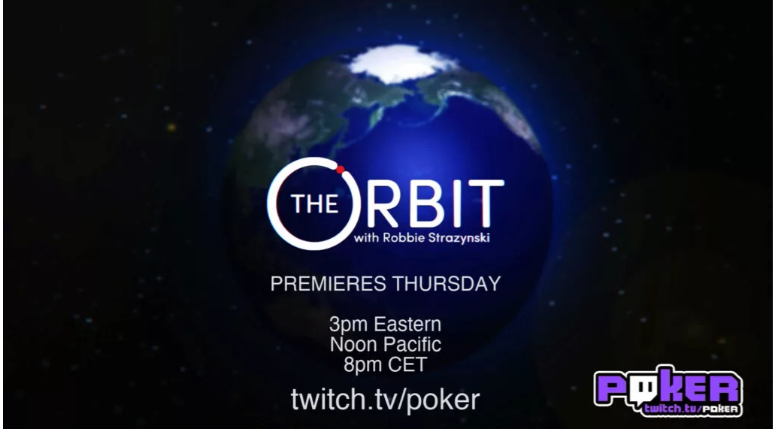 What’s your dream lineup for The Orbit?

It’s kind of funny — but also amazing — to already be asked this question after having produced just two episodes!

I’d have to say that my dream panel would consist of people in the poker world who we almost never hear from because they rarely — if ever — agree to do media appearances. As such, a panel consisting of Phil Ivey, Doyle Brunson, Isai Schienberg, and Chris Ferguson would just be out-of-this world insane and the definition of “must-see” content.

For a variety of reasons that lineup would essentially be next-to-impossible to arrange, but even getting one of those guys on a future show would be super cool.

Is there anything else you want to tell us about the show, or your vision for the show?

As for The Orbit, I think the goal of the show is pretty clear, as per the aforementioned. But there’s something bigger at play here, namely Twitch.tv/poker, which Leigh, Des, and I co-own. We intend for our channel to become a premier destination for original poker programming, and The Orbit represents our first step towards that vision.

Through future video content initiatives that we will undertake, Twitch.tv/poker will become a hub for poker news, curated player streams, and poker entertainment that we believe will capture the attention of an audience hungry for top-quality productions.