The COVID-19 pandemic pushed poker players to regulated online poker sites in record numbers during the spring months of 2020. With the pandemic crisis entering its eighth month, however, revenues for regulated poker platforms in New Jersey and Pennsylvania are showing a steady downward trend.

New Jersey’s online poker sites brought in just over $2.55 million in revenue for September, nearly a 50 percent decrease from the state’s all-time high of $5.1 million set in April 2020. Since that record-setting month, July stands as the only month in 2020 that didn’t see a month-to-month decline for overall revenue.

After the COVID-19 crisis forced Atlantic City casinos to shut down in March, poker players in the Garden State flocked to the state’s regulated poker sites. The record-setting $5.1 million in April was followed up by revenue earning of more than $4.5 million in May.

June online poker revenue dropped nearly 22% in June, however, with New Jersey’s poker sites bringing in just under $3.54 million. Revenue numbers then jumped up big in July, with the WSOP Online Bracelet Events series running throughout the month on WSOP New Jersey. 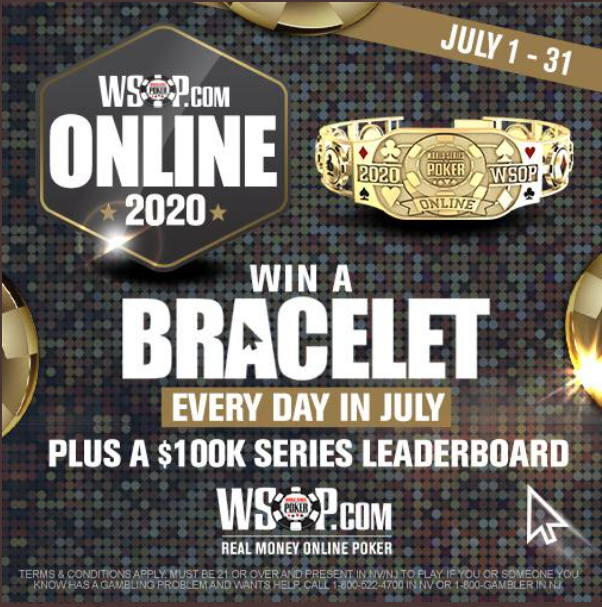 Bolstered by the biggest U.S.-facing tournament series of the year for regulated poker sites, New Jersey’s online poker rooms took in just under $4.82 million in revenue for July. That number included a record-setting month for online poker skins under the Caesars Interactive license (WSOP and 888poker), which earned just under $2.83 million for July.

PokerStars PA set an all-time monthly revenue high for the U.S. regulated online poker industry in April 2020, with more than $5.25 million in earnings. May 2020 proved another successful month for the platform, with just under $4.6 million in revenue earned.

Since then, however, PokerStars PA revenue has declined every month. June saw a sharp drop in revenue, with PokerStars PA taking in $3.24 million. That marked a nearly 30% dropoff from May.

The downward curve has continued through the summer, with July ($2.986 million), August ($2.73 million), and September ($2.376 million) all seeing revenues drop versus the previous month.

The online poker revenue reports for New Jersey come from the New Jersey Division of Gaming Enforcement, and those reports can be viewed here. The Pennsylvania Gaming Control Board reports revenue for Pennsylvania’s online poker industry, and the PGCB figures can be seen here.