Do great players seek out tough competition in order to improve? Is looking for softer games a better and more profitable approach? For Landon Tice, the poker journey requires him to play against the highest-level competitors.

That path is taken by choice for Tice, who stated as much in a recent Twitter post. The tweet by one of poker’s most talented young players prompted a discussion thread that included some of poker’s biggest names chiming in.

I'd rather battle and improve than play in soft games.

I'm looking to be one of the greatest, not just print money in soft spots.

“I’d rather battle and improve than play in soft games,” Tice wrote in the tweet. “I’m looking to be one of the greatest, not just print money in soft spots.”

Many poker pros agreed with Tice’s sentiments about seeking out the best competition when playing the game. The 21-year-old Tice has risen to prominence in the poker community in 2020, regularly playing 500NL and bigger online games, and even higher live stakes. 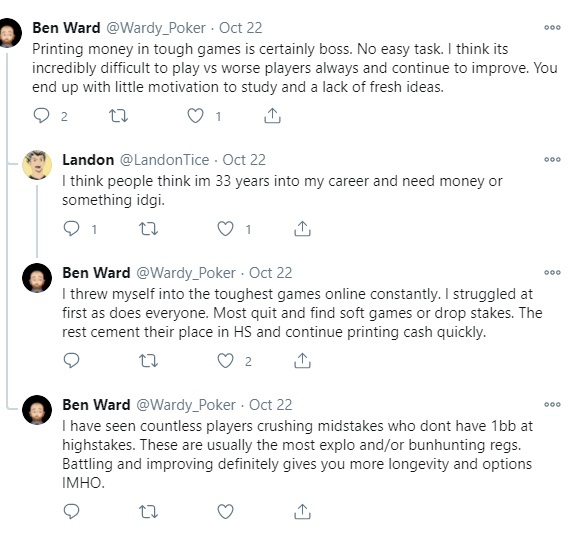 “Printing money in tough games is certainly boss,” Ward responded. “No easy task. I think its incredibly difficult to play vs worse players always and continue to improve. You end up with little motivation to study and a lack of fresh ideas.”

“I threw myself into the toughest games online constantly. I struggled at first as does everyone. Most quit and find soft games or drop stakes. The rest cement their place in HS and continue printing cash quickly.”

Johnnie “Vibes” Moreno, one of poker’s most prolific vloggers, regularly produces content centered around his exploits in $2/$5 cash games across the U.S. Moreno admitted that he takes a different approach to making money as a cash game poker pro.

“You remind me of myself when… Actually, no. That was never me,” Moreno wrote in response, following that comment up with a laughing emoji.

Tim Bishop, who labels himself as a “Poker semi-pro,” went back and forth with Tice regarding Bishop’s perception that Tice was putting ego in front of the ultimate poker goal, which is making money. 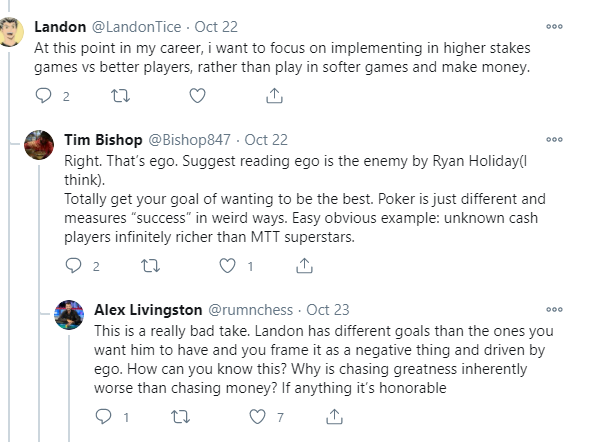 “Totally get your goal of wanting to be the best,” wrote Bishop. Poker is just different and measures “success” in weird ways. Easy obvious example: unknown cash players infinitely richer than MTT superstars.”

That exchange prompted Alex Livingston, the third-place finisher in the 2019 WSOP Main Event, to weigh in with his thoughts on the matter. 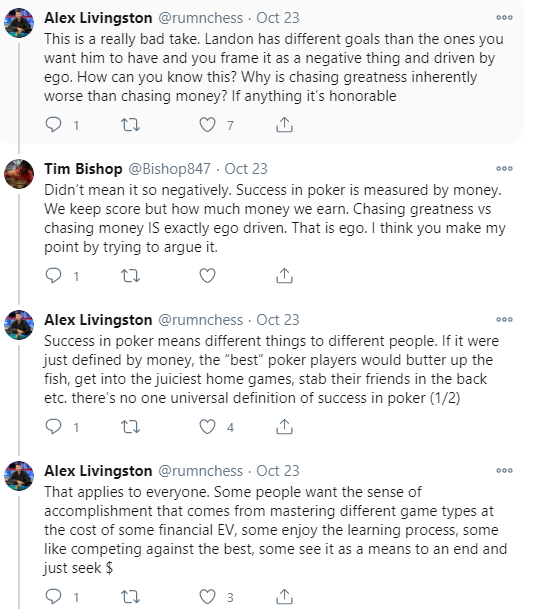 “This is a really bad take,” Livingston tweeted in response to Bishop. “Landon has different goals than the ones you want him to have and you frame it as a negative thing and driven by ego. How can you know this? Why is chasing greatness inherently worse than chasing money? If anything it’s honorable.”

“Success in poker means different things to different people,” continued Livingston. “If it were just defined by money, the “best” poker players would butter up the fish, get into the juiciest home games, stab their friends in the back etc. there’s no one universal definition of success in poker.”

Phil Galfond, currently embroiled in the latest chapter of the Galfond Challenge, took time away from his playing and Run It Once Poker ownership duties to add his own thoughts on the debate.

Lots of interesting takes in this thread on the right approach. It’s hard to not be colored by our own successes and failures, but I think it will be helpful for many to read through experiences that different players have had and what they’ve learned from their careers. 1/ https://t.co/RI5WdlYp01

“Lots of interesting takes in this thread on the right approach,” wrote Galfond. “It’s hard to not be colored by our own successes and failures, but I think it will be helpful for many to read through experiences that different players have had and what they’ve learned from their careers.”

“What I’ve learned from my experience is that you can’t accurately predict your future opportunities in poker. You’ll be able to make the most of those opportunities with a combination of skill, bankroll, & relationships… but the relative importance of each is unknowable,” continued Galfond.