The first-ever all-online festival in the history of the European Poker Tour came to an end Wednesday, with a Swedish online grinder taking home the biggest prize awarded in the series.

A total of 1,304 entries registered for the Main Event, with the fourth and final day of the tournament playing out as the last 2020 EPT Online event to finish. The seven-figure win for ‘WhatIfGod’ marked the biggest payday awarded across the 20-event EPT Online schedule.

The heads-up finale appeared poised to play out as a marathon, with both players going into two-handed play with upwards of 75 big blinds each. Just seven hands into the duel, however, ‘WhatIfGod’ secured the win.

The flop came 4♥A♥6♠, ‘WhatIfGod’ bet 8 million, and Adams made the call. The turn fell 8♠, ‘WhatIfGod’ checked, Adams bet 15.94 million and got a call from ‘WhatIfGod’ to take the action to the river.

The river came A♣, a disastrous card for Adams who then had trip aces, with his opponent holding the same hand with a superior kicker. Adams shoved for 97,839,382 and saw the bad news when ‘WhatIfGod’ snap-called, clinching the win.

Other big names at the final table

The final table included a fierce lineup of poker pros. David ‘MissOracle’ Yan (3rd – $ 520,966) capped off an incredible week of online scores with a third-place finish for more than a half-million dollars.

Yan finished fifth in the GGPoker High Rollers Week Super MILLION$ Main Event Tuesday for a $342,187 score. Yan’s EPT Online Main Event run came to an end at the hands of Adams to set up the deep-stacked heads-up finale. 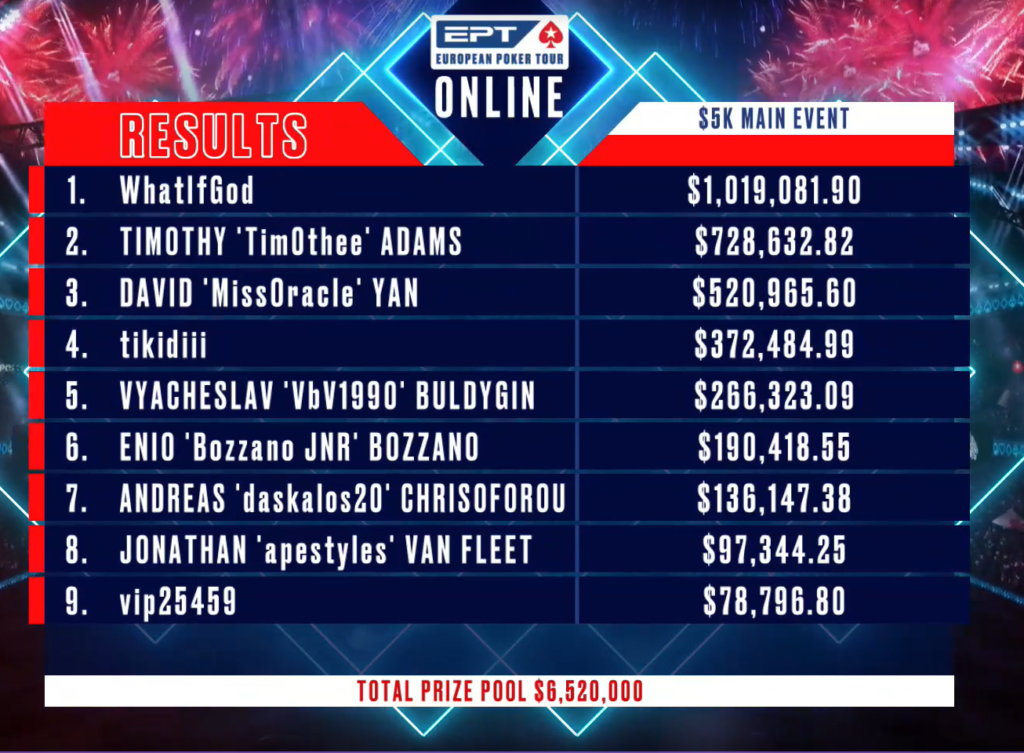 COVID-19 forced the cancellation of several European Poker Tour events throughout 2020. In response, the EPT and PokerStars moved the EPT online for the first time ever.

The 2020 EPT Online stayed true to the traditional schedule used in land-based EPT events. The Main Event prize pool of $6,520,000 far surpassed the guarantee of $5 million.