As part of its rollout of World Series of Poker festivities beginning in late May, the WSOP has released its schedule of 2022 WSOP Online bracelet events. Online bracelet events have been a small but growing part of the overall WSOP experience since being introduced in 2015 when a single online event was offered.

Dropped today, in conjunction with the 2022 WSOP’s 88-event land-based schedule, the online portion of the summer’s festivities shows 14 more bracelet events, according to the WSOP’s home site. However, there may be either 21 or 26 separate online bracelet events being offered — 13 for the shared-liquidity WSOP.com offered to Nevada and New Jersey players, and either eight or 13 more for online participants in the other current WSOP.com state, Pennsylvania.

However, that schedule as currently displayed contains at least one unresolved issue, which in turn leads to the possibility that the 2022 WSOP will award 26 online bracelets, rather than the 14 as shown. The fourth and fifth events shown appear to show the same event twice, but with different buy-ins, scheduled for Sunday, June 19:

The table as shown above turns out to not be the schedule of events as originally published earlier today. That table (below) shows an additional column to the right, which indicates for which states a given event will be available:

The column at far right offers an explanation for the duplicated June 19 events, in that a separate PLO 6-max event was originally shown as a Pennsylvania-only offering, but with a $500 buy-in instead of the $1,000 buy-in for the joint NV/NJ tourney.

However, that introduces a second question about the 2022 WSOP Online bracelet schedule. If Pennsylvania remains separate from the Nevada/New Jersey player bloc when the WSOP arrives, then Pennsylvania may get its own abbreviated bracelet-event slate.

Seven of the events in the original table show state eligibility as “NV/NJ/PA”, but under current regulations, that cannot be. The likeliest explanation is that each of these table entries represented two events, with the same starting date and time, format, and buy-in; one would be for Nevada and New Jersey players, and the other would be Pennsylvania. The only exception to that would be the June 19 PLO 6-Max event with the lowered buy-in necessitating the separate entry.

That means that 21 separate bracelet events could be contested, if this original table is reintroduced at a later date, albeit with modifications. The original page as archived offered no explanation for the differentiation as shown in the far-right column. Meanwhile, the WSOP has been under immense time pressure to release its 2022 live and online schedules. Continuing this line of thought, the WSOP may have realized immediately after publishing the online-bracelet schedule earlier today that the needed explanations about the state-by-state eligibility had not been entered.

If such was the case, then deleting the “State” column of the schedule represented the quickest fix, though it created the interpretive error regarding the June 19 events. And if this was what happened, then the WSOP will almost certainly issue a corrected version of the online schedule in the near future, with a fuller explanation of each event’s state-by-state eligibility. 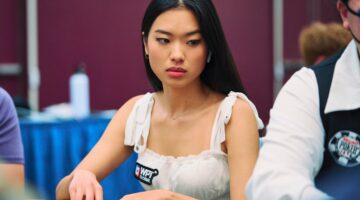 How to play poker in a casino

Four of a Kind in Poker