Brad Booth has been located and he’s alive and well

At long last, Brad Booth has been found. And the best part of it is the former high-stakes poker player is, as his family says, “alive and well.”

Booth’s friends and family have been trying to find out where he’s been for over two months now. No one knew if he was even alive or if his life was in danger. On July 30, 17 days after he was last seen at his home in Reno, Nevada, a missing person’s report was filed.

His whereabouts were unknown to his friends and family. He could have been out in the wilderness on a lengthy camping trip to escape reality for a while. Or, he could have been in danger. Many poker players feared the worst. Some wondered if he had committed suicide and was depressed with how his life had changed, going from playing for hundreds of thousands of dollars years ago to being indebted to numerous poker players. Others thought he may have been the victim of a violent crime.

But those who care about him can now breathe a sigh of relief. April Horne sent a message to the poker community on Facebook, relayed from Booth’s family. She let everyone know that he’s “alive and well” but didn’t release details of the situation. Horne simply said that Booth took some time to himself, but didn’t explain where he’s been or if he was ever in danger. 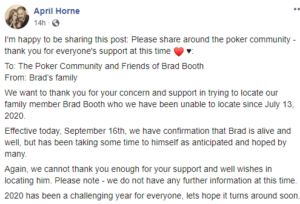 “We cannot thank you enough for your support and well wishes in locating him. Please note – we do not have any further information at this time. 2020 has been a challenging year for everyone, lets hope it turns around soon,” Horne wrote.

The ups and downs of a high stakes poker player

Booth was last spotted in Reno at his apartment on July 13. His roommate told police Booth told him he was heading on a three-day camping trip but only brought minimal items. The poker pro then, according to the roommate, took off in his truck and didn’t return.

His whereabouts were unknown, and he didn’t communicate with any friends or family members during his disappearance. On July 30, a missing person’s report was filed, but a month later and there were still no leads on the case.

What caused many in the poker community to fear the worst is Booth’s checkered past. A decade ago, he fell on hard times. He used to be a regular inside Bobby’s Room at Bellagio, which hosts some of the highest stakes poker games in Las Vegas. Booth even appeared on a couple of High Stakes Poker episodes back in the day, and even pulled off one of the show’s most memorable bluffs, forcing the great Phil Ivey off pocket kings.

All that success came to a crashing halt about 10 years ago. Booth lost his entire roll, much of it online. He went from, as he once said, “playing for a Ferrari a day to playing for a 1986 Honda Civic with a busted up fender.” During his downfall, he became indebted to many poker players, including Doug Polk.

Although he apparently tried to pay off his debts, Booth was unable to make good on his loans at times. The fall from grace caused many to wonder if his life was in jeopardy after Booth was reported missing. But, as it turns out, he’s alive and well.