Putting together a list of the greatest female poker players ever isn’t so easy. That’s because there have been so many talented ladies in this game. But for this article, we narrowed it down to the five we felt best deserved recognition. We’ll count them down from five to one.

Then in 1996 she became the first woman win an open WSOP event — $2,500 Pot-Limit Omaha for $180,000. She beat out 180 players for the honor, most of whom were men. In fact, Enright has never had a difficult time competing in this male-dominated game. As such, she was inducted into the Poker Hall of Fame, along with the WSOP G.O.A.T. Phil Hellmuth, in 2007. To this day, Enright remains one of the game’s top ambassadors.

This selection won’t go over too well with many in the poker community. But this isn’t a list of the best humans in poker. It’s list of the greatest female poker players of all-time in terms of accomplishment. Annie Duke was arguably the top female poker player in the game during the poker boom era. But she disappeared from the game following the Epic Poker League scandal in 2012. In that scandal, she took a six-figure payout while the league went bankrupt. She lost most of her fans in poker after the incident.

Before the Epic Poker League debacle, Duke racked up over $4.2 million in live tournament cashes. That’s the most live cashes by a woman at the time. She also won a WSOP bracelet in 2004 ($2,000 Omaha Hi-Lo 8-or-Better for $136,860). Her biggest score ever was for $2 million for winning the 2004 WSOP Tournament of Champions (non-bracelet, invite-only event). In that tournament, she beat the great Phil Hellmuth himself heads-up for the title. Meanwhile her brother, Howard Lederer, busted in 3rd place. Lederer was later ousted from the game due to his involvement with the Full Tilt Poker scandal in 2011. Both Lederer and Duke are now public speakers and no longer play poker.

The top three slots on this list were fiendishly difficult to fill, because all three ladies are so far above the rest. Each one deserves to be recognized as the greatest female poker player of all-time. We put Jennifer Harman just a small notch below the top two though, only because she’s never been much for tournament poker. Thus, it’s difficult to truly assess her game.

Harman still has over $2.7 million in live tournament winnings. Her true calling, however, has always been in cash game poker. The Reno, Nevada native was a regular in “Bobby’s Room” at Bellagio. She played in the highest-stakes games in Las Vegas for many years. Daniel Negreanu has long referred to Harman as the greatest female poker player of all-time. Of course, he might be biased given they’ve been close friends for years.

Kristen Bicknell is, without question, the best female poker player in the game right now. She’s been crushing it on the high roller circuit the past few years and is the three-time defending Global Poker Index Female Player of the Year recipient. Her boyfriend, Alex Foxen, won the overall GPI Player of the Year in 2018 and 2019. Bicknell, the only Canadian born player on this list, has been successful online and in live poker tournaments.

The Partypoker ambassador has over $5.1 million in live tournament cashes, which includes three WSOP bracelets. During the 2020 WSOP Online Bracelet Series on GGPoker, she took down the $2,500 No-Limit Hold’em 6-Handed event for $356,412. Bicknell and Foxen form arguably the most talented poker couple ever. They’re both considered among the top high rollers in the game today.

Although Bicknell is the top female poker player in the game right now, Vanessa Selbst still holds the all-time crown. Selbst, a New York native, mostly retired from the game of poker in 2019. The long-time PokerStars ambassador took on a position at a hedge fund, and has moved on from the game of poker other than the occasional tournament she’ll pop up at. 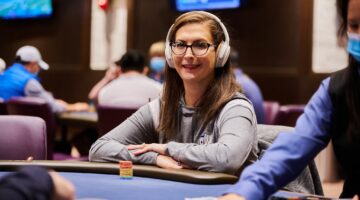 A conversation with Katie Stone, Part 2

A conversation with Katie Stone, Part 1