Midway Poker Tour appearing to try to settle up with players

Inaugural MPT event ended in chaos, with several players not paid in full

The debut event for the Midway Poker Tour descended into madness last weekend, with prizes paid in silver and players unable to verify the actual value of those precious metals.

It appears that MPT officials are trying to settle the difference with several players, however. A series of messages and screenshots on the Midway Poker Tour Facebook page appears to show MPT founder Dan Bekavac compensating players for the shorted payouts, which took place on the final day of the Midway Poker Tour Chicago event Oct. 4.

Illinois live poker rooms are shuttered due to COVID-19, but the Midway Poker Tour Chicago was able to go forward by partnering with the 4 KIDS Sake charity. The partnership allowed the tournament to run legally as a charity event, which took place at Sheraton Suites Chicago Elk Grove.

Under the Illinois Charitable Games Act however, tournament payouts could not exceed $500 plus the original buy-in for the $1,100 Main Event. This forced the 4 KIDS Sake organization to scramble while trying to find a way to acquire more than $200,000 in precious metals, which were to be used to pay the top finishers in the tournament. 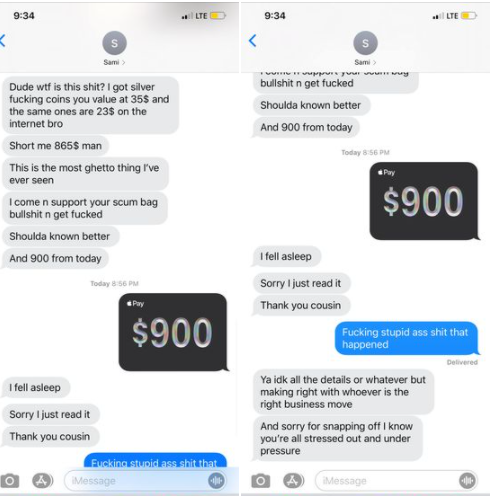 A discrepancy between retail versus the resellable value of precious metal payouts caused several players to be shorted at the Midway Poker Tour Chicago $1,100 Main Event. Image source: Facebook

The charity group did find a way to purchase around $208,000 in silver just before the final day action kicked off, but that silver was purchased at retail price. That left the final 31 players in the tournament with no way to resell the silver at the true cash equivalent.

As the gravity of the situation set in on the final day of the Main Event, 4 KIDS Sake officials were left to deal with the situation, with Bekavac not on hand at the tournament at that point.

The above screenshot shows what appears to be an exchange between a shorted player and Bekavac, with Bekavac sending a $900 Apple Pay payment to correct the player’s shortfall. Another player, 20th-place finisher Bryant Miller, posted a similar screenshot on Twitter.

PokerNews Head of U.S. Live Reporting Chad Holloway was on hand at the Sheraton Suites Chicago Elk Grove for the entire event. According to a tweet from Holloway, Bekavac is working with all 31 final day finishers to try to make the payouts right.

I just spoke w/ Midway Poker Tour's Dan Bekavac. He is working on getting in touch w/ all 31 cashers to make whole by making up the ~30% value difference they missed in the silver debacle. Won't be fixed overnight, but will take a little time. Will continue to monitor & update. https://t.co/DeUGBSwGx9

“I just spoke w/ Midway Poker Tour’s Dan Bekavac,” Holloway tweeted. “He is working on getting in touch w/ all 31 cashers to make whole by making up the ~30% value difference they missed in the silver debacle. Won’t be fixed overnight, but will take a little time. Will continue to monitor & update.”

Renato Spahiuhttps took first place at the Main Event, with the advertised payout for that winner’s finish coming in at $55,060. Each of the top six finishers was poised to make five-figure sums.

The tournament drew 266 entries and played down to the money before the start of Day 2. All 31 players coming back for Day 2 were guaranteed at least $2,300, but by Illinois law tournament officials could only pay a maximum of $1,600 to each player in cash.

Poker.org will continue to update this story as it progresses.