A new detail emerged Tuesday in the ongoing saga of the inaugural Midway Poker Tour event, with an apparent sponsor of the tournament unaware of its perceived affiliation with the MPT.

PokerBROS issued a statement on Twitter Tuesday, stating the company didn’t even know the event was taking place. The Midway Poker Tour Chicago ran this past weekend at Sheraton Suites Chicago Elk Grove, with the $1,100 Main Event taking place Oct. 2-4.

Some players — on the TwoPlusTwo poker forums and social media platforms — contended that registration for the Main Event required a PokerBROS account number. The Tuesday tweet from PokerBROS refutes that claim.

“PokerBROS have been made aware of the payout controversy that impacted players at the Midway Poker Tour in Illinois this past weekend,” reads the statement. “As the details from what occurred at the event became known, it became clear that the event organizers also required players to download the PokerBROS app and register an account with the Midway Club as part of the registration process.”

The tweet goes on to say that PokerBROS had no knowledge of the event, and in no way authorized any kind of cross-branding with the Midway Poker Tour Chicago event. The Twitter post contends that the MPT violated PokerBROS terms of service by claiming an affiliation with the mobile poker app.

“As a result of this breach by the Midway Club, their Club has been banned from the PokerBROS platform,” read the tweet.

TwoPlusTwo, Twitter posts claim PokerBROS was affiliated with the tournament

A TwoPlusTwo thread emerged in the aftermath of the MPT Chicago event, with original poster ‘isjfklds’ contending that upon arriving at the tournament, the player was asked to provide a PokerBros player ID. The poster didn’t have an active PokerBROS account but signed up for a new account in order to fulfill what appeared to be a requirement to enter the tournament.

Twitter user “Ross Brizolli” added a second account of PokerBROS advertising the MPT evet in the weeks leading up to the tournament. 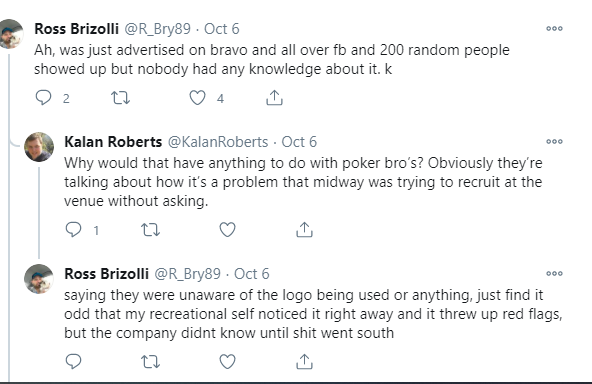 “Ah, was just advertised on bravo and all over fb and 200 random people showed up but nobody had any knowledge about it. k,” wrote Brizolli in a response to the PokerBROS tweeted statement. In a subsequent response, Brizolli disputes the PokerBROS claim that the company had no affiliation with the event.

“(S)aying they were unaware of the logo being used or anything, just find it odd that my recreational self noticed it right away and it threw up red flags, but the company didn’t know until s*** went south,” Brizolli wrote (punctuation added).

What is a Dead Man’s Hand in Poker?