Find out all about poker player Veronica Brill in this complete player profile, including her biography, poker accomplishments, net worth, and her conflict with player Mike Postle through his cheating scandal.

Who is Veronica Brill?

Veronica Brill is a poker player, commentator, and YouTube personality. Born in Poland and raised in Canada, she now lives and works in California.

In 2019, she became the center of an enormous controversy in the poker world. The controversy was triggered when she accused fellow poker player Mike Postle of cheating. The alleged cheating occurred during live-streamed poker games hosted by Stones Gambling Hall.

Brill and 88 others sued Postle for cheating. After he was dismissed from the case, Postle later brought a suit against Brill and several other prominent figures in the poker world, including Daniel Negreanu and ESPN. However, Postle retracted his suit in April 2021.

Brill has appeared on Poker After Dark, Live at the Bike, and Stones Live.

Veronica Brill was born in Poland in 1978. When she was six, her family emigrated to Austria, fleeing the communist regime.

In Austria, they lived in a refugee camp until they moved to Canada. In the 80s, Brill took up performing arts. She entered beauty pageants and later worked as a DJ under the name Lady V. She enrolled in college, jumped from subject to subject, and eventually graduated as a licensed practical nurse. In a few more years, she upped the ante on her healthcare career, qualifying as a full registered nurse.

Her first brush with poker came from a broken TV. The TV would only pick up three channels, one of which showed poker shows from the UK round the clock. With the mathematical bent of her mind, she found the game fascinating.

She was prompted to move from spectator to player by her then-boyfriend. He would play through entire weekends, grinding in home games. Brill began to learn the rules, playing at a card room in an Edmonton Mall until she could beat that game.

She took her winnings to bigger and bigger games, some in Vegas. Each time, she learned from losing to better players. Then she would return to the Edmonton game to rebuild her bankroll.

In 2008, she married a U.S. citizen and moved permanently to Texas. While working in the IT department of a local hospital, she went back to school, earning a master’s degree in predictive analytics.

Brill gave birth to a son, David, who tragically died of cancer at age 3. She returned to poker in 2013, finding that it helped her cope with that very personal tragedy. Eventually, she found a niche working the commentary booth in games at Stones Gambling Hall.

After parting ways with Stones in 2019 over the Postle scandal, she continued to play poker, to commentate for other poker shows, and to create Youtube content.

Veronica Brill is an amateur poker player. Her achievements within the game are therefore modest. The Hendon Mob records $19,819 in live cashes for her.

Her major achievements in poker have been as a personality, commentator, and as the whistleblower in the Mike Postle scandal.

What is Veronica Brill’s Net Worth?

Without access to her personal finances answering this question is pure speculation.

Unlike many public figures in the poker world, where tourney results and bankroll management provide grounds for reasonable estimates, Brill’s income is entirely private.

By these figures, with Brill’s low lifetime winnings numbers, it’s likely that her net worth is less than $100,000.

While working for Stones Gambling Hall, Veronica Brill began to worry about the performance of fellow player Mike Postle. Brill both played in some of the games and would work the commentary booth.

In March 2019, Brill approached Justin Kuriatis about the possibility of Postle cheating. Kuraitis dismissed her. In September, she went public with her concerns.

“Am I sure that this player is cheating? No.” Brill tweeted. “Do I think that there is a greater than zero % chance that he is? Yes.” Brill added in the same thread that she felt “that with such a high vpip and play style, if we run the SIM a hundred times with players of equal competency [Postle]’s running in the 95th percentile of results” 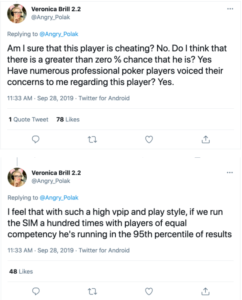 Joey Ingram analyzed Postle’s play, and soon the prevailing opinion in the poker world was that Postle had cheated. In a series of Youtube videos — including a five hour breakdown of a single session — Ingram laid out the case for Postle having cheated.

In 2020, Brill was part of an 88 person class-action lawsuit against Postle, Stones, and Kuraitis. Postle was dismissed from the case on the grounds that gamblers do not have legal recourse for losses under California law. The majority of other plaintiffs eventually settled with Stones and Kuriatis. Brill did not.

In early 2021, Postle sued Brill and several other poker pundits for defamation. He demanded $330 million in damages. On April 1, 2021, Postle dropped the suit after his lawyer lost contact with him, and he was unable to find new counsel. As of the time of writing (April 20, 2021), Brill has an anti-SLAPP suit outstanding against Postle. Anti-SLAPP suits are a way of punishing frivolous defamation suits that might impinge upon free speech. The anti-SLAPP suit, if successful, will make Postle responsible for covering Brill’s legal costs.

The courts have never ruled on, or even tried, Postle for cheating, or Brill for defamation. The Postle v Brill saga is still underway.

Money, Meebits, and coaching props are on the line in Smith v. Gonzales HU game

ACR springs into battle with a record-breaking PKO festival