Midway Poker Tour website down; no word from social media channels since Oct. 5

The debut event for the Midway Poker Tour ended in one of the more negative outcomes the poker community has seen in quite a while. After looking like a situation involving shorted payouts might be rectified, the payment situation from the disastrous live tournament is once again in doubt.

PokerNews Head of U.S. Live Reporting Chad Holloway tweeted Sunday with a list of players affected by the payout controversy from the Midway Poker Tour Chicago event. The event ran Oct. 2-4 as a charity event in the Chicago area, with the legal classification as a charity tournament allowing it to operate in Illinois.

That situation resulted in the top 31 players in the tournament having to accept payouts in silver, but the redeemable cash value of that silver didn’t add up to actual cash amounts dictated by the payout structure of the $1,100 event.

Holloway’s list showed that while a few players from the top 31 had been made whole from payments by Midway Poker Tour founder Dan Bekavac, the majority were still dealing with a shortfall.

Midway Poker Tour update — Over weekend I tried to verify which players have been made whole.

Green = confirmed they are whole

Orange = Believe yes but waiting to hear back

Blue = Believe yes but no way to contact to verify

Holloway’s contacts with the top finishers in the tournament yielded the information that only two of the top 14 had received corrected payouts from Bekavac. Holloway’s tweet included a comment that Bekavac hadn’t been heard from in four days.

Midway Poker Tour website wiped; no social media comments from Bekavac in more than a week

Neither Holloway, Bekavac, or any of those 12 top finishers have provided an update on the payout situation since Sunday. In what could be a bad omen for the players still awaiting compensation, the Midway Poker Tour Facebook page hasn’t been updated since an Oct. 5 message from Bekavac.

That post featured an apology and a promise to make all payments correct from what appeared to be Bekavac himself. That Oct. 5 message, however, is the last communication posted on the MPT Facebook account.

The Midway Poker Tour Twitter account hasn’t been updated since congratulating MPT Chicago Main Event 8th-place finisher Nicola Ditrapani for his $8,150 cash in real-time, during the final day of the Main Event Oct. 4.

Adding to the bleak outlook for the remaining payouts is the status of the Midway Poker Tour website. As reported by Kevin Mathers Tuesday, the website is down: 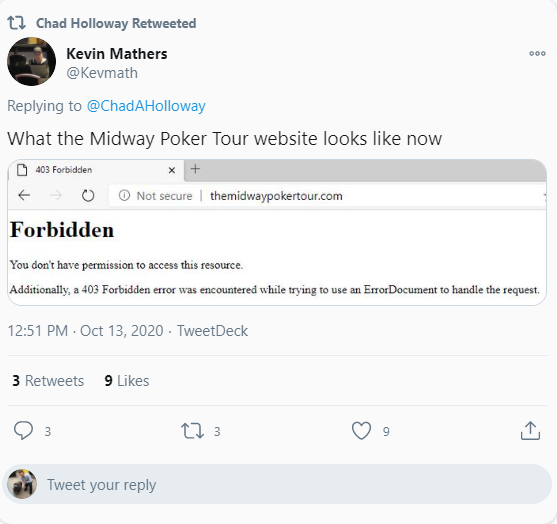 According to reports from Holloway, who was on hand live for the entire event, and some of the other players involved, the silver payouts shorted the top 31 finishers by approximately 30 percent on average. The 4 KIDS Sake charity was forced to purchase over $200,000 in precious metals to legally pay players cashing for more than $1,600 (the $500 maximum mandated by law plus the $1,100) buy-in.

The charity paid retail price for that silver, however, and players paid out at the event have no way to resell the silver at a price that matches what they were actually promised in the payout structure.